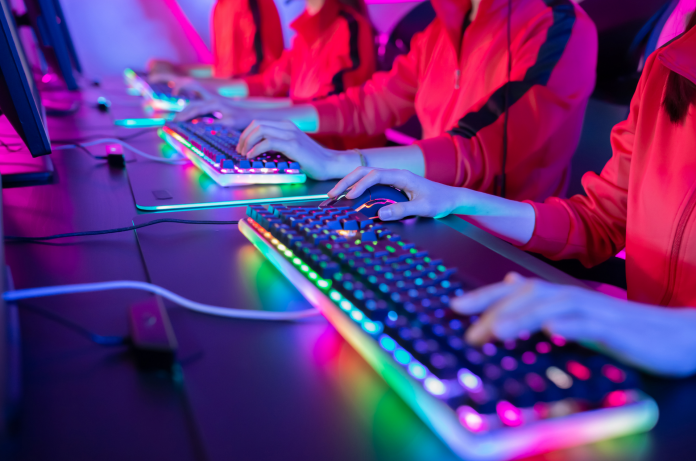 What is the real scrimmage meaning?

Do you think of football when you hear the word scrimmage? The word scrimmage is mostly used in American football, when the ball is placed on the “line of scrimmage”, at the start of a play.

Have you ever heard of the word scrimmage while playing an esports game online? Let’s see what it means in gaming and esports and when it is used.

What is scrimmage definition?

A “scrimmage” (shorter scrim) meaning in esports is an unranked online match between several players or teams – usually as a means of practice. The word usage is mainly reserved for clan members in online first-person shooter games (FPS).

A scrim is not an official game, and it is a practice in football, hockey, and other team sports. The scrimmage also means training between two squads.

Scrims are conducted in almost any game. Most popular include CS: GO (Counter-Strike), Fortnite, Dota 2, League of Legends, Overwatch, PUBG, Rainbow 6, Rocket League, etc. Getting into a particular scrimmage will vary from game to game.

In some online games like CS: GO, getting into scrims is pretty easy. All it takes is to set up a community server or join another person’s server to play training matches.

For other games, the scrimmage is a little more complicated. For games like Fortnite, the “Discord” system is used to coordinate with players, and it allows players to participate in amateur, pro scrims, solo and regular snipes.

There are a few steps you have to follow to scrim:

Why Do esports players and teams do scrim?

Esports players have to organize scrimmages because most gaming titles do not provide opportunities to practice within the game.

The ranking system does not offer enough challenge for the most hardcore gamers out there in many games. Competitive and professional gamers do the scrims to practice against other very competitive players.

For example, what do you do if you are down a golden ten minutes into a League of Legends? The option to start the game at that stage isn’t available. Covering all scenarios before going into a major tournament, a series of scrimmages makes a lot of sense.

In traditional sports like football, players can improve dribbling or taking free-kicks without playing a practice match. In esports, the only way to do that is to participate in scrims.

What are pro scrims?

Professional esports athletes usually refer to this term when they play against other experienced players or teams.

There is almost no significant difference between scrim and pro scrim. Pro scrimmage matches include professional esports athletes or players who train for a higher award.

In this type of match, athletes practice against each other before a big game or tournament. Professional teams use professional fights and “boot-camp” to test and improve their skills, test potential players and other players’ endurance, try new playing methods, and exchange experiences.

Scrimmage helps the professional community and the esports audience be more active and seek more streaming and games.