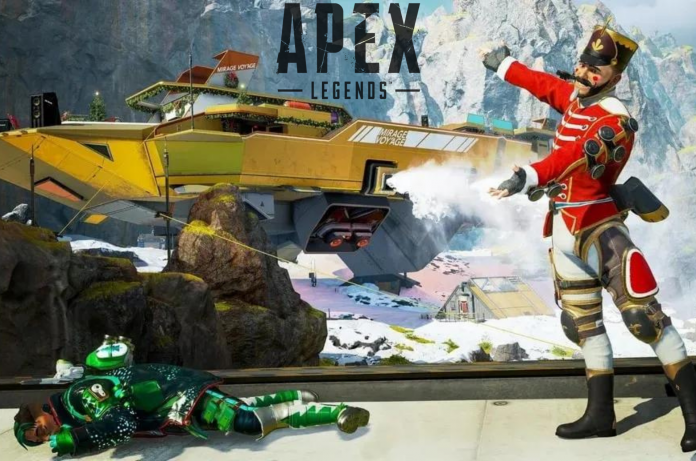 Do you know how to start the party at Mirage Voyage in Apex Legends?

Apex Legends is a free-to-play hero shooter game where legendary competitors battle for glory, fame, and fortune on the fringes of the Frontier.

And starting a party at Mirage Voyage is one of several challenges that Respawn Entertainment added to the game with the arrival of Mirage’s Holo-Day Bash.

Although many challenges offer tempting rewards, this one gives players free Legendary weapon skins. Players need to start the party on the Mirage Voyage to get it. In this article, we will show you how to complete it.

How to start the party at Mirage Voyage?

The Mirage Voyage ship has become a fan-favorite since first added to the game in Season 3. It is marked on the map situated near Lava Fissure.

There are a few different ways to get on the ship. The first step to start the party is to queue into a classic World’s Edge game of Apex Legends. For this challenge to start the party, you’ll want to get to the floating vehicle decked out with the holiday decorations.

Once you get into the match, you will be able to find and board Mirage’s flying party ship, the Mirage Voyage. Find the dance floor and look for a raised platform with a DJ station when you get on the ship.

Then you should climb to the platform and approach the station, where you will find a screen prompting you to press a button to party. This is the way of confirming the challenge to summon Mirage decoys and blow air horns when you press them. The button can be pressed several times during a play, but it takes some time to reset.

This way, you will set off the music, fireworks, and other different visual effects. Later, the party will commence with a whole host of holograms to show their crazy, fantastic dance moves. Then complete the match to finish the challenge and unlock the G7 Scout skin.

Game update: In Apex Legends, the Mirage Voyage is one of the most popular POIs. Unfortunately, Respawn Entertainment has confirmed that it probably won’t return to the battle royale anytime soon.

“Oh the Voyage is CRASHED crashed. I think it’s down for good”, said the Respawn Lead Designer Daniel Klein on Reddit six months ago. This was a huge disappointment to fans who wanted the ship to be a recurring location on the battle royale’s maps.

We will have to wait and see if Respawn Entertainment plans to release something else or introduce another similar ship in the game to fill the void left by the ship’s departure from the battle royale. Time will tell.

Make sure to keep up with Esportrends for all future Apex Legends and other news.

Best of luck, and have fun playing!