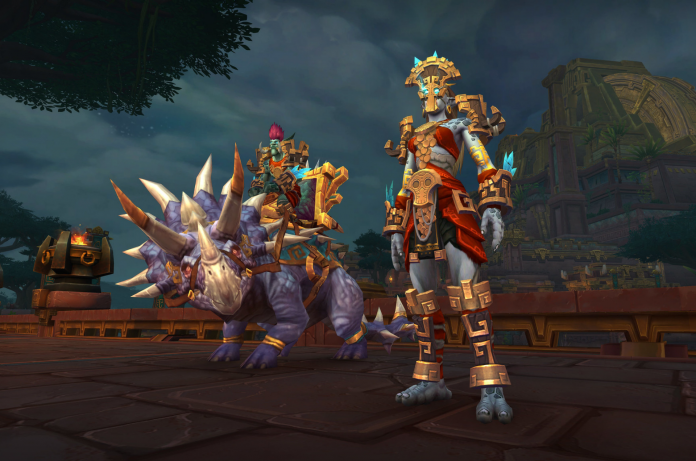 Do you know how to unlock the Zandalari Trolls in World of Warcraft?

There is City of Gold, which boosts gold collected from creatures by 2% and Embrace of the Loa. It offers you unique powers and allows you to choose a Loa by making an offering at one of the world’s Lou Shrines.

Then there’s Pterrordax Swoop, which slows your decay for two minutes while restoring 100 percent of your maximum health in six seconds.

Have you tried to unlock Zandalari Trolls?

To unlock the race, you must first finish the War Campaign on the Horde side of Battle for Azeroth, including the 8.0 and 8.1 components. The titles featured are The Day is Won, Mekkatorque’s Battle Plans, Through the Front Door, and Fly-Out to Meet Them. This will get you the achievement Tides of Vengeance.

Through The Final Seal, you must also finish all prominent lore tales in the Zuldazar zones. The Final Seal, Zuldazar’s Throne, Nazmir’s Dark Heart, Secrets in the Sands, a Blood Bargain, and The Throne of Zuldazar

Finally, you must finish the quest sequence, which begins with A Royal Occasion and requires you to see the Zandalari emissary at The Great Seal in Dazar’alor.

How to unlock Zandalari Trolls

During the Battle for Azeroth narrative, each component of the accomplishment relates to a distinct storyline of the invasion of the Kul Tiran continent, the Alliance’s primary land.

Sends you to Tiragarde Sound, where you help Horde Champion Rexxar in seizing Alliance stored Azerite Weapons to shift the battle tide. After completing this questline, you will get “The Day is Won.”

On the orders of the Horde Warchief, Banshee Queen, and Leader of the Forsaken, Sylvanas Windrunner, you must travel to the Kul Tiran prison of Tol Dagor. There you are to free Lady Priscilla Ashvane, a Kul Tiran noblewoman who Sylvanas feels has vital information for her plot. There are, of course, resources to be plundered. After finishing this questline, you will get “Through the Front Door.”

The Adventures of Gallywix and the G.M.O.D

Team up with Jastor Gallywix, the Goblins’ obese, resourceful, greedy, and (in my view) histrionic leader, the Former Trade Prince of the Bilgewater Cartel.

You and your partner partake in activities characteristic of any Goblins/(insert your race here) tag team, including but not limited to: murdering Alliance, rescuing goblin peons. Because who wants to pay for medical bills and, most importantly, blowing everything up?! Upon completion of this questline, you will get “Mekkatorque’s Battle Plans.”

You have now completed one part of the quest to unlock the Zandalari Troll allied race.

It might be hard unlocking Zandalari Trolls, but remember that practice makes it perfect whenever you fail!

Are you looking for the best server to play on the WoW Classic? Check our WoW Classic server population list. World of Warcraft Shadowlands is available now on PC and Mac.