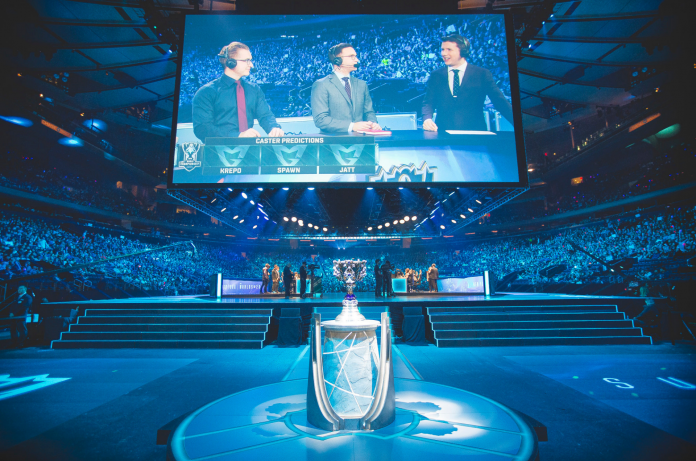 Are you a loyal fan of the League of Legends franchise and passionately follow the LoL esports scene, players, and teams? Then you know that the whole experience wouldn’t be complete if there weren’t League of Legends casters.

Who are the casters?

Casters are the ones that provide you with all the information about games, players, teams, and other news from the world of League of Legends.

The best and most detailed understanding of the game comes from the moderators who’ve played it themselves. The casters and analysts are the game’s voice in any professional League Of Legends broadcast. Their job is to comment on what’s happening throughout the match while providing knowledge and insight into champion matchups, jungle paths, item builds, and skill interactions.

Like any commentator, casters need to be prepared for unexpected developments, know every team and champion, and adequately convey the live match experience to all viewers. The caster has to have a magnetic personality, speak clearly and be interesting.

You’re probably familiar with some of the most popular faces, but here are the top 5 casters of all time.

Who are the best League of Legends casters?

Jatt’s professional League of Legends career Jett started as a jungle for Rock Solid. He became one of North America’s most popular casters, known for his crazy predictions and seemingly endless game knowledge. Although Jatt’s career as a professional player was short-lived, he joined the LCS broadcast team after his retirement.

Well-spoken and informative, he is one of the best color casters that has been on the scene to date. Jatt was highly knowledgeable about the various foreign scenes in the competitive League of Legends and always analyzed every game aspect. In 2020, Jatt left the broadcasting desk to take a head coach at Team Liquid.

Deficio is another play-by-play-turned-genius-color caster for the European LCS.

He is like an on-air coach for viewers, breaking down every game phase expertly and concisely. Throughout his career, Deficio had many iconic moments.

His first memorable moment on camera was when Copenhagen Wolves qualified for the LEC. Now he is the general manager for LEC team Origen.

Deficio became a League of Legends caster in 2014. Over the last seven years, he has had an extraordinary caster career. Before he became general manager of LEC team Origen, he had become the most popular caster globally and is one of the most beloved casters ever.

Kobe began his professional League of Legends career as a jungler for HotshotGG and CLG alongside Chauster. He has been a member of the broadcast team since the start of the LCS in Season 3.

As a broadcaster, Kobe is best known for his old LCS segment called “Professor Kobe,” where he’d break down gameplay clips, making relentless jokes about misplays and other in-game mishaps.

Kobe’s shout-casting energy is unrivaled. He can easily create hype and has a professor-like ability to deconstruct games live for the viewer. His casting is an unwavering force.

Crumbz began the professional League Of Legends career as a jungler for Team Curse before moving to top laner at Dignitas. Shortly after, he moved back to the jungle for the rest of his career.

After he retired as a professional player, Crumbz has been a fixture at the LCS analyst table. Crumbz is an analyst who provides viewers with knowledge and insight into the interplay of champions, team compositions, and jungle paths. He is known for his incredible pre-game predictions, earning him the nickname “the Prophet.”

Eefje “Sjokz” Depoortere has become a recognized voice in esports. She hosted the League of Legends World Championship and the LEC and got a few awards for Best Esports Host at The Game Awards and the Esports Awards. She has experience as a competitive player and participated in several local League of Legends competitions in her region and the Belgian National Team.

Depoortere has taken Esports hosting to a new level, backed by her broadcasting experience, gaming knowledge, and showmanship.

She successfully combined her love for gaming and journalism and became a freelance Esports journalist.